Romanian people has 2000 years, but 2018 marks 100 years from the Great Union of the Romanians (the unification on 1 December of Transylvania, Bassarabia and Bukovina with the Romanian Kingdom).

The Cultural Organization “Mostenitorii” from an important Romanian village Vaideeni (Valcea county) celebrated the Great Union by symbolic marking of the country borders, as it was in 1918.

From the ethnogenesis point of view, we, the Romanians, are “Daco-Roman” descents. Romanian continuity on the actual Romania’s territory starting with the Latinisation of the autochthonous population (Dacians) by the Romans.

Dacia Traiana was included among the imperial provinces in 106 AD, after the victory of Trajan emperor. After that, Trajan’s Column in Rome was raised to celebrate the success of Romans.

What we can easily notice in the bas-reliefs of Trajan’s Column is that the port of the native population, Dacians, is almost the same with that of the Romanian peasants, in great discrepancy with the Roman’s port, obvious changed.

The Dacians were in the pre-Christian period the only population in Europe that had only one God, Gebeleizis (a monotheism exception in the polytheist civilised world of Greeks and Latins). Also, another interesting aspect is that the Dacians  were laughing at the funeral in order to celebrate the beginning of a better, superior live after death.

All the elements of continuity, preserving the traditions, make from Romania a place of profound authenticity.

One of the customes remained from the Dacians, practically unchanged in the last 2000 years is „Calusarii” ( „The hazel’s nuts”).

The dance „Calusarii” is related to the feast of Sun, a magic dance that have as motif the nut of hazel, called „calus” in some regions of Romania. The rite of this dance gives special forces to its participants, that have after that the power to bring good to people, animals, harvests. In a phase of the dance, one of the participants enter in the center and fall after he is touched with a hazel branch, taking upon him all the evil.

A dance with similar movements is find only in Egypt, a place where for a short period was developed a monotheistic pre-christian religion having in center the sun.

Everyone that is seeing „Calusarii” is immediately attracted by the power of its rhythm, the force of movements, the beauty of the colourful customes and the magic of the symbols.

As I said in an older post, in 1940 Henri Matisse painted “La blouse roumaine”, an innovator amazing painting that still charm, inspired by a genial manifestation in art, the traditional Romanian folk costumes.

Didier Grumbach, Dean at the French Institute of Fashion, said that for his Romanian collection, Yves Saint Laurent “had inspired from something that he loved most”, the models had also skirts stylized after the Romanian folk “fota” and the hair caught like the girls in the Romanian Villages.

The creation “La blouse romaine” remains one of the headlines for “the king of fashion” that is why it was one of the pieces that made the tour of museums around the world, arriving also in Romania in 2009 at The National Art Museum with the occasion of Fashion Festival “Pasarela”.

Not once Oscar de la Renta was inspired by the “ethnic costume and the folkloric—European peasant embroidery” (Vogue). The creations inspired also by the Romanians folk costumes of Oscar de la Renta for spring 2008 were a great success. A unique collection, inspired by the peasants’ cloths but full of royalty grace to the richness of motives, the attention give to details, natural materials, handmade stitches of the Romanian folk reinvented with the genius of a great master.

The spring of 2012 Tom Ford’s collection assemble elements of inspiration from Spain, South America, but also from Romania, Fagaras region more exactly. Adele posed for Vogue in this outfit by Tom Ford.

After working for great names in the international fashion, the French designer Phillippe Guilet presented in november 2011 a collection tribute to Romania, the pays which temporally adopted him. Philippe Guilet, who was also trying to present a beautiful Romania, as he knew it after staying in Romania, was greatly appreciated by the fashion critics, an entirely favorable article being dedicated in Washington Post to his late collection.

Queen Mary of Romania – the first promoter of the Romanian folk costumes (April 25, 2012)

One of the things that impressed me the most were the Romanian traditional costumes kept with great care by my grandmother. Initially worn by her grandmother, with an age of more than 120 years, its represent one of the most amazing forms of art.

Kept with great care in many Romanian families for generations, the traditional costumes are all made manually only with natural fibers coloured only with natural coloures. Sometimes made from one of the most fine material, floss silk, hand embroidered, with a stitch point that is just as thin as you can see. The models are very varied, increadibly richeness patterns, with typical models for each region of the country. 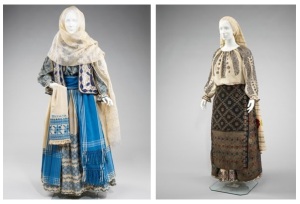 The celebre Henri Matisse, recognized initially as a „Fauve”, an upholder in fact of the classical tradition in French painting, was fascinated by the Romanian traditional folk costumes, especially by the specific blouse named “ie”.

The Romanian blouses were received by Henri Matisse as a present from his friend, the Romanian painter Theodor Pallady.

In 1940, during the hard period of war, Henri Matisse painted “La blouse roumaine”, one of his masterpieces.

Recently, Antonio Mega Ferreira  has launched at Lisbon a new novel “A blusa romena” inspired by the celebre painting of Henry Matisse.

Queen Mary of Romania – the first promoter of the Romanian folk costumes (April 25, 2012)